Blood Money Boxing’s Rudy Mondragon (Editor in Chief and Co-Founder) sat down with Pierre Banks of In My Humble to discuss various topics in the boxing world. These topics include Mikey Garcia, upcoming fight between Brandon Rios and Timothy Bradley, and a reflection on the Abner Mares and Leo Santa Cruz fight that took place August 29th at the Staples Center.

Special thanks to Elie Seckbach for video footage from my visit to the Robert Garcia Boxing Academy. It is worth noting that he was one of a few independent reporters present at the Robert Garcia Boxing Academy Gym to document the fundraiser that Robert Garcia put on to support Luisa Rosas, a cancer victim from the Oxnard community. It is actions like this by members of the boxing community that are worth sharing and documenting. At the same time, people like Robert Garcia don’t do these things to get media attention. Nonetheless, it is important that we see how boxers and trainers give back to their communities.

Check it out, comment, and share BMB family! More to come. This is just the first of many videos to come between BMB’s Rudy Mondragon and Pierre Banks from In My Humble. Enjoy the conversation! 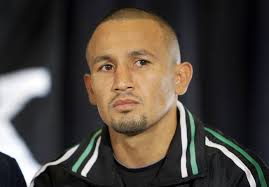 What else is new? Orlando Salido (42-12-2, 29 KOs) steps into the ring and wins in exciting fashion. The man with the short end of the stick last night was worthy contender, Terdsak Kokietgym (53-5-1, 33 KOs) from Thailand. Both came out swinging in the first round and Terdsak was able to earn the first knockdown. Orland was also awarded with a knockdown, but he earned it via a low blow on Terdsak.

The fight could have ended earlier. Referee, Eddie Claudio, made a huge mistake in the sixth round. Orlando was pressing and hurting his man and the referee stepped in to stop the round as he confused the 10 second warning for the end of the round bell. This helped Terdsak recover and last through 10 complete rounds, eventually being stopped in the 11th.

Is Salido back? Can he land a big fight now? Well, Orlando has been in many wars. He is, in my opinion, responsible for taking out all of the fight in JuanMa. Although Salido won both of those fights, he absorbed so much punishment. Not to mention the one sided fight he lost to Mikey Garcia. He lost the fight on a technicality, but nonetheless Salido took home too many punches. All this ring wear makes Salido a risky fighter. It is a given that he is dangerous, but what I am talking about is Salido getting old in his next fight. At age 33, he has made his career out of his brawling, move forward style. In boxing however, that style makes you pay in the long run.

In conclusion, this was a great match up. These two fighters gave each other hell and in the end, it was a battle of who could stay on their feet. These are the fights that happen when you forget about the Reebook and Under Armor sponsorships or who is the A Side and B Side here. Fight fans are provided with an all out exciting fight where pride and the hunt of winning and moving up is at stake. Sure these two are fighting for money, but the winnings are much more than just the CREAM (Cash Rules Everything Around Me).

Big news and events take place everyday. January 19, 2013 was no exception. Gennady Golovkin (25-0) won his fight and revealed to the world that he is a beatable fighter. Rocky Martinez (26-1-2) retained his WBO Super Featherweight title with a draw against Juan C Burgos (30-1-1). Most will agree that Burgos did his job in the ring and should have walked away with that belt. However, unacceptable judging determined that it was not Burgos, but Martinez who would remain champion. January 19 was also the day that Kelly Pavlik, who at age 30, announced his retirement from the sport of boxing.

The biggest news in the context of boxing and its future was the beautiful performance that Mikey Garcia (31-0) put on tonight against Orlando Salido (39-12-2). Garcia came out with big shots in the first round that helped him knock Salido down twice. He was also able to put Salido down again in the 3rd and 4th round of the fight. It was complete domination from Garcia who utilized his longer reach, counter punching ability, effective jab, and most importantly his composure to control and dictate the fight. As a boxing fan, it was just fun to watch a young prospect rise up in his first real challenge. Not only did Garcia deliver in the ring, but he also let the boxing world know that he is the real deal. The fight ended after the 8th round due to an accidental headbutt that broke Mikey Garcia’s nose. Scorecards were in Garcia’s favor, but it would have been nice to see the young man go the distance or KO his opponent.

Mikey made a statement tonight. Steve Kim (Twitter @stevemaxboxing) tweeted after the fight that Mikey Garcia “is a lot like Juan Manuel Marquez in his timing, counter-punching and precision.” I most definitely agree and would add that this young fighter also has the power and composure to be a big threat in the 126, 130 and 135 lbs weight classes. Mikey Garcia has what it takes to be relevant and stay relevant in the boxing game for a long time.

Garcia is in a good situation. The boxing world is talking about him, he has great people around him (trainer and brother Robert Garcia), boxing skills, patients, composure, and an incredibly high boxing IQ. As long as Mikey continues to work and improve his craft, stay healthy (mind, body and spirit), and stay humble, boxing fans can only expect good things to come.