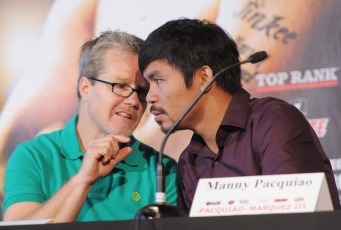 Freddie Roach, trainer of the famous Manny Pacquiao has stated that he prefers not to have a tune up fight in April and would rather have his fighter jump into a fifth fight against Juan M Marquez.

In an interview with Fight Hub TV, Roach shared that there is talk about a tune up fight in Macau, a fight that would feature both Pacquiao and Marquez together against different opponents. The plan would be to set up a 5th mega fight between Pacquiao and Marquez. Roach feels that Manny Pacquiao is the type of fighter that does not need a tuneup fight. He says his fighter will get back on the horse and prepare for a 5th fight.

After the devastating knockout that Manny Pacquiao experienced against Juan M Marquez in December of 2012, it only makes sense for Pacquiao to have a tuneup fight in April to a) regain his confidence and b) use the April fight to assess whether or not Pacquiao has seriously declined in his boxing game. Ask big name (hall of fame) fighters what a knockout does to a fighter. George Foreman once stated that he had nightmares after M Ali dropped him in the Rumble in the Jungle.  It takes time and rebuilding for a fighter who has suffered a blackout, knocked the fuck out knockout as did Pacquiao.

My thoughts: Take the tune up fight and assess your life after that. And if after that April fight you assess that you need to walk away from the boxing game and focus on your political career, acting, singing, and physical/mental health, then so be it. On the flip side, Freddie and Team Pacquiao might not want a tune up fight in April because there is a risk of Pacquiao losing. Pacman losing in April means that a November, mega payday showdown between him and Marquez would no longer generate interest from the boxing community.