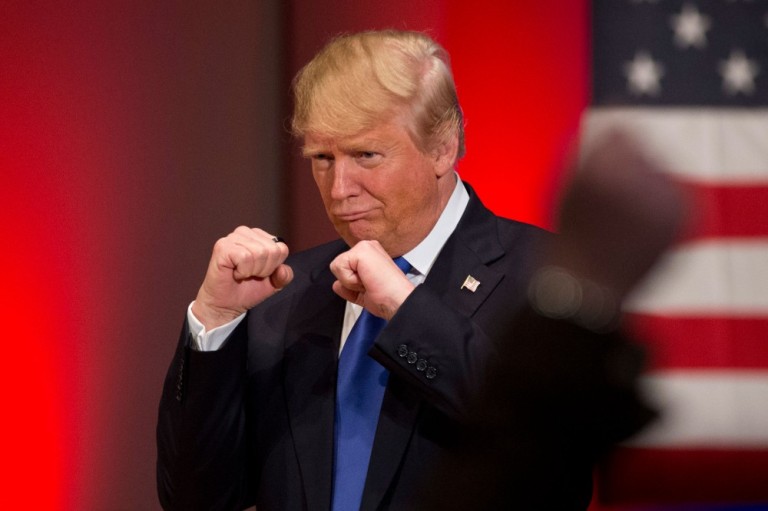 The January 18 press conference for the highly anticipated March 4 showdown between Keith “One Time” Thurman and Danny “Swift” Garcia showed how Trumpism is seeping into the bloodstream of the sweet science. Politics is indeed not separate from the sporting world.

At the press conference, Angel Garica, father and trainer of Danny Garcia, took over by engaging in trash talking and mental warfare against Thurman. This is part of the game. Danny Garcia is not the trash talking type, he does his talking in the ring and often presents himself as a professional in front of the media. This might be why his father does so much of the trash talking, knowing well that it creates a drama that helps promote the spectacle of boxing.

What took place at the press conference was Trumpism rearing its disgusting faces of anti-immigration, jingoism (hyper-patriotism), and sexism. Notice I did not use racism, although that is an additional facet of Trumpism. Many media figures are quick to say that Angel’s use of the N-word (See video below) was a disgusting example of racism. I disagree as the media has not substantially explained why it is an example of racism. For them, it is simply a headline.

Angel’s use of the N-word is more so an example of a light skinned Puerto Rican man from North Philly who has more than likely used the N-word within a cultural context of understanding. For many people I have spoken to over the years, the use of the N-word by Latino peoples is used with an understanding that the word holds a great deal of historical weight. The use of that word is directed at people where mutual love exists. Some have even told me that the word is only used towards people they would be willing to die for and kill for. In other words, the N-word, used within a cultural context of mutual love, understanding, and respect, has a totally different meaning than Angel’s use of it at the press conference.

This is not to say that I excuse Angel’s use of it. Using the word outside its cultural context opens up the meaning of the word for many interpretations, racism being one of them. But its more complex than that. The tone and intention of the way Angel used it was not racist. But his use of it in public promotes a misunderstanding and disregard of the historical use of a word that has been used by white men with racial and economic power during slavery for example. A word that has been historically used as a tool to stigmatize and negatively label black people in relation to white people and white supremacy. It also signals to people that the N-word can be used irresponsibly, ignoring the dark legacy of the word.

Angel’s use of the word in public also impacts and offends black people who do not have a personal connection to the user of the word. Though Angel’s use of the word was not intended to hurt anyone, the impact of that word, outside its cultural context, can have offensive affects on people. That is how powerful that word remains today. I would bet money that Angel would not use that word in a completely new setting with black folks he did not know. The reason for this is it is outside of his cultural context, involving new people that he does not know. The use of the N-word in that new context would be a form of disrespect because there is no mutual bond or connection to the people of that cultural space.

Although I say his use of the N-word was not intended to disrespect Keith Thurman (I would argue “Bitch ass” and “My son gonna fuck you up” intended to disrespect and challenge Keith), a question still remains to be answered. As a bi-racial man who is read as black, what impact did Angel’s use of the N-word have on Keith Thurman? This is an important dynamic that has not been explored.

Trumpism reared its nasty faces in the form of anti-immigration, jingoism (hyper-patriotism), and sexism. When I first met Angel back in 2014, he shared his thoughts on immigrants and boxing. This is something that Angel has been passionate about, the idea that Americans should fight Americans only. This echoes Trump’s philosophy that he recently shared in his inauguration speech: “Buy American and hire American.” Angel Garcia embodied this idea when he said that the only respect he has for his son’s opponent is that he is an American fighter. Ironically, Angel Garcia is of Puerto Rican descent, which has a long colonial history with the US as Puerto Rico remains a colony and unincorporated territory of the US. Despite that imperial legacy, Angel presents himself as a staunch supporter of Trump.

Towards the end of the presser, Angel had this to say:“God bless America. Where Donald Trump at? Come get him. I want to see Trump. Trump, where are you? Make America great again.”Need I say more? To my knowledge, this is the first clear example in 2017 that demonstrates Trump politics entering the sphere of boxing. It is ugly and contradictory of boxing as this sport has historically recruited poor black and brown fighters from all over the world. It is a sport that exploits people and denies them of basic employee benefits. Boxing heads who stand for Trump makes little sense to me. It seems more fitting that boxers would stand United Against Trump.

After Angel’s Donald Trump rant, he finished off by directing some harsh words towards boxing publicist, Kelly Swanson. I’m sure Swanson told Angel to knock it off, that is her job after all. I think it would have been better if Angel had simply ignored her plea, but rather than let it go, Angel directed harsh words towards this woman by saying, “I’ll jack you up!” Actions like this should not be normal and accepted. This is not what it means to be a man. Yet, under the new presidential regime, it does not seem like sexism, patriarchy, and misogyny will be challenged or dismantled (the people will continue these efforts despite Trump’s lack of care and conviction on these serious matters). As recently as this morning, Trump disregarded the powerful Women’s Marches that took place across the nation yesterday. Not to mention Trumps history with male entitlement over women’s bodies and their right to choice. Given these disturbing times, the question of what it means to practice healthy forms of masculinity is critical!

As mentioned earlier, the ideas that Angel Garcia has about immigration and his hyper-patriotism is nothing new. The question I leave readers with is to what extent do the beliefs and words of Donald Trump provide a green light for conservative and hate filled ideas to emerge? In response to his dad’s theatrics, Danny Garcia stated “I’ve heard Trump say Worse!” This may be true, but Angel Garcia nonetheless echoes many of the toxic ideas that we see in Trump.

As a boxing expert, fan, and critic, I also question the art of trash talking. Can trash talking manifest within reason, innovation, and creativity? Riding the curtails of hate speech to inform one’s engagement in mental warfare against one’s opponent is a misuse of a high status platform. The boxing world can do better. I believe it can.