Canelo vs. Kirkland: Balancing the World of Boxing

On the night of May 9, 2015, Saul ‘Canelo’ Alvarez scored an impressive knock out win over James Kirkland. The stage was set as these two squared off inside Minute Maid Park in Houston, Texas to a crowd of 31,588 (per ESPN’s Dan Rafael).

This match followed the ‘Fight of The Century’ between Floyd Mayweather Jr and Manny Pacquiao. Alvarez vs Kirkland and Mayweather vs Pacquiao are two different fights that produce very different results. Mayweather vs Pacquiao was a demonstration of boxing skill, strategy, and intelligence where as Alvarez vs. Kirkland was a fight that produced 2 knockdowns and 1 knockout in only 3 rounds. In other words, it was a fight that would surely give fans a violent spectacle.

Hardcore boxing fans knew what to expect from last week’s ‘Fight of the Century’ and therefore did not buy into the hype. Boxing fans who bought into the hype however, were left disappointed and rightfully so as they paid big bucks thinking they would see a Gladiator like combat. Instead they saw one of the best technicians in boxing history go to work in typical Mayweather fashion. 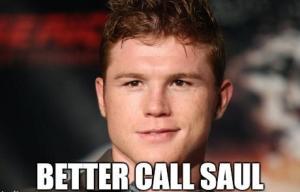 Kirkland came out fast as if he wanted to make sure he earned every single cent from his $1.3 million dollar pay day. He had a new corner and was missing Ann Wolfe. Many questioned Kirkland’s decision to not have Ann Wolfe in his corner. The last time they were separated, Kirkland suffered a first round TKO defeat to Nobuhiro Ishida.

Nonetheless, Kirkland came out in the first round looking to land devastating shots. Alvarez weathered the storm well. Kirkland landed some shots and Saul took them very well. It definitely speaks to the chin this young 24 year old boxer has. Alvarez waited for Kirkland to tire out a bit and then he went on the offensive. Great exchanges in the first round resulted in Kirkland being knocked down by a Canelo solid straight right.

Round two was filled with action. Canelo was tagging Kirkland with strong shots. Kirkland was square and coming forward, absorbing a great deal of punishment in the process. In the third round, Canelo landed a sweet uppercut that knocked Kirkland down again. Kirkland got up and on shaky legs was told, “show me something” by referee Jon Schorle. Kirkland tried to show the referee and the fans something, but was caught with another straight right as he missed with his left hook, sending him spinning down to the canvas. He was down for the count and the contest was stopped.

It was tough watching Kirkland go down like that. As Sergio Mora stated on twitter, “Boxing and wars are won by strategy, not man power. Kirkland had NO strategy, just firepower.” Well said by the former Contender winner. Kirkland did not appear to have a plan. He just went forward. Credit to Canelo as he studied Kirkland and executed a game plan that was successful, entertaining, and fan friendly.

Canelo made two different statements with last night’s victory.The first is that he is the man to balance the boxing world by bringing offensive fights that produce blood, money, and entertainment. Balance is key and heavily needed in the sport of boxing. We need good chess matches with mainstream fighters who display great skill and intelligence as well as offensive fighters who take intelligent risks, get hit, but in the process of getting hit, land power punches of their own. Saul has shown to be up for the tasks of bringing fight fans what they want to see: Excitement, Offense, and Bloody fights!

The second statement he made was toward Miguel Cotto. I’m sure Cotto was watching and taking notes. If Miguel Cotto beats Daniel Geale on June 6th, we might just see Canelo vs. Cotto. The classic nationalist script of Mexico vs. Puerto Rico will definitely inform the promotion and hype of this highly anticipated fight. Canelo let the world know he is game and ready for a fight with Cotto.

Golden Boy Promotions tried to make this fight happen for May 2, but plans never materialized. Let’s hope they can execute and set the stage for a September 12th, 2015 Showdown. Canelo vs. Cotto is the only fight at this time that will compete with the numbers that Mayweather brings to the table. If this fight get’s booked, Mayweather might just be bumped from his usual September date.