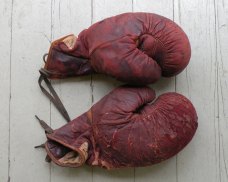 First off thank you to all of our fans and friends who support BloodMoneyBoxing.com. We are days away from the biggest money fight in boxing history! Notice how I said MONEY fight. It is a good match up, but some will argue it is 6 years too late and others will argue that there have been other boxing classics. Nonetheless, this is the biggest fight of this generation, like it or not! With that said, enjoy some of our BMB fan and friend predictions. Our supporters are most definitely TBE (THE BEST EVER)! Enjoy.

Pacman has to win all rounds since he’s on the B side. Not happening. After 12 rounds of salsa dancing by Floyd Mayweather, Mayweather and Pacquiao will end in a draw. If Money keeps it in the middle of the ring, this should be a telephone booth fight.

Pacman and Money are fighters that rarely lose rounds and if they do, it is because they are trying to adjust their strategy and figure out their opponent in that particular round. I see this fight playing out like Mayweather Maidana 1, Pacquiao will push so much in the early rounds but Mayweather’s defense will be at its best and that will lead to frustration for Pacman by the 5th round.  Mayweather will dictate the pace after that. In my opinion, Mayweather is preparing to win 8-9 rounds and doesn’t have a problem if he loses 3-4 since in those losing rounds he will use them to figure out Pacquiao’s punching strategy and will adjust. I see Mayweather winning by decision, 115-113. Pacman is fun to watch, but his one dimensional approach which has lead him to win many fights, will not be enough that night. Always remember this quote, “Defense wins championships”.

I think the fight will start off with a combination of both fighters feeling each other out and turning into a competitive first six rounds of boxing. During that time, Pacquiao will win a couple of rounds with staying busy, while Mayweather will begin to settle in after making adjustments. From there, Mayweather’s jabs to the body and head, counter punching ability, and defense will help him pull out the victory. Mayweather 12 rounds, unanimous decision.

In my eyes, I see Manny will have to come out and apply pressure in the early rounds utilizing his jab. I think Mayweather will get his timing down and clinch when Manny bottles him up in the corners. Mayweather will continue to catch Manny out of position with counter punching and pot shots. I have Manny stunning Mayweather in the later rounds. Eventually, Mayweather’s speed and quickness will be too much. Money Mayweather wins by majority decision.

Like always, the first six rounds will set the tempo of this fight. All the pressure is on Manny Pacquiao to make this into an action packed fight. Floyd will be Floyd, the big question is how is he going to react to Manny’s attacks??? Manny will bring it!!!!! But can he keep up with Floyd’s foot work and timing????? If Manny doesn’t hurt Floyd by the 6th round, Floyd is going to shut down the fight and GIVE MANNY A BOXING LESSON!!!!!!! Floyd by TKO 11th RD!!!!!! TMT

Mayweather is going to win (although i hate to say it) by decision. It will be a typical boring Mayweather fight as he sits back and counters Pacquiao with pot shots all fight long. Pacquiao does have a punchers chance and Mayweather has had some trouble with southpaws. I can see him winning a few rounds to make it a little close. However, I don’t think Pacquiao will win a decision over Mayweather in Vegas.

Thats my prediction as a fan of boxing, now what i really want is for Pacquiao to knock the hell outta Mayweather!

Pacquaio will win the decision since Mayweather will be playing defense rather than offense; he will win by a single round on the cards.

If Pacquiao can get in the ring and fight his fight right off the bat–that is, come out aggressive and intense throwing a whirlwind of punches–he can win on points. Stamina is crucial in this match, and if Pacquiao can expend his energy delivering blows while he makes Mayweather use his defense, it’s in the bag. Being at home may give Mayweather a boost, but this is a fight Pacquiao has been AFTER for years and can win if he directs his aggression properly. Folks say southpaw is the ‘x-factor’–it’s exciting, sure, but won’t prove to be the game-changer. Finally, as much as Pacquiao wants to land the knock out punch, he won’t get it. Just my thoughts. Let’s do this!