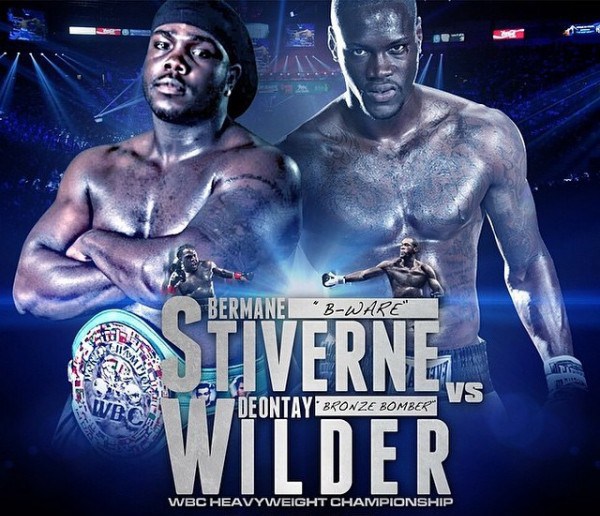 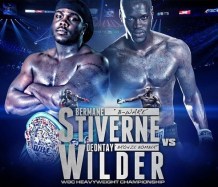 Bermane “B.WARE” Stiverne (24-1, 21 KOs) will be defending his WBC heavyweight title against Deontay “The Bronze Bomber” Wilder (32-0, 32 KOs) on Saturday, January 17 at the MGM Grand in Las Vegas. Many believe this could be the fight where a U.S. born heavyweight fighter is crowned with the title. This is of great significance as there has not been a U.S born heavyweight champion since 2006 when Shannon Briggs held the WBO title. The match up we have for tomorrow is an experienced champion versus an inexperienced athletic knockout artist. This is how the BMB sees it:

32 KOs > 21 KOs. 6ft 7in > 6ft 2in. 84in > 80in. You don’t need to be a math wiz to know that the person in the left hand side of the equation has an advantage than the person on the right. So whom do these numbers belong to? The first set of numbers are the total fights won by knockout over each boxer’s career, which favor Wilder over Stiverne. The second set are each boxer’s height. Again, advantage Wilder. The last set of numbers are each boxer’s reach. No surprise, advantage Wilder. It is striking the physical advantage that Wilder has over Stiverne. The only number where Stiverne has the advantage over Wilder is this: 36 > 29. Well, maybe advantage isn’t the right word since this set of numbers denote age of the boxers. Though here at BMB we try to avoid seeing boxing as simply numbers and statistics, the number differentials between these fighters should not be ignored. Even if you ignore these numbers, looking at previous fights, you get the sense that this will be a one-sided fight as long as Wilder uses his reach advantage and pounds all night. The only chance Stiverne has is to get into Wilder’s space just once and deliver an authoritative punch. Unfortunately, at 36, it might be too late for Stiverne. Stiverne had struggled against previous foes bigger than him but has survived because none of those fighters had sufficient the power to take him down. Wilder doesn’t have a power problem and he should be the one to dethrone Stiverne.

Bronze Bomber? More like Baby Bomber. There’s no debate that 32 KO’s is impressive, but I wonder about the mental maturity of the same Deontay Wilder picking on fights on the internet. In my mind Stiverne is more of the professional boxer, with methodical combinations and movement to pick off stronger opponents. Although Mexican-American Arreola is a much more clumsier fighter, I believe in Stiverne’s mind, Wilder is of the same template “The bigger they are, the harder they fall.” I think I would have to see a true demonstration of maturity and ring generalship on Wilder’s end before I believe he’s the Vanguard of the new American Heavyweight. Until then, I pick Stiverne for a late 9th round KO for his ever-compact style and fundamentals to frustrate Wilder who’s looking for an early KO. If Wilder tries to go out of his KO style, he’s still in for a long night as Stiverne will get inside and score points if all Wilder wants is to prove he can last. Wilder need to demonstrate explosive quickness and a mix of body and head work that I just don’t see, and is more of Stiverne’s style albeit with less power.

There is a reason why they call Deontay “The Bronze Bomber,” he is far from being a gold. Deontay started his career at age 19 and has relied on his athletic ability. One who relies on their athletic ability in boxing sacrifices the technical and mental aspect of their game. All of Deontay’s fights have ended by the 4th round, meaning two things: 1) He has only fought scrubs and 2) He doesn’t have the experience to enter the second half of a regular fight, let alone a title fight. Stiverne has more experience and as of recently, has proven he can go the distance against an aggressive, hard hitting fighter. Not only did he go the distance against Cris Arreola, he was also able to knock him out in the 6th round of their 2014 rematch. Stiverene is a patient counter puncher with power in both hands. Wilder again has fought no body! How is Wilder making a million for this fight and Stiverne only $910k? This is why: Although Stiverne is the champion, Wilder enters this fight as the A-Side because his promoters (currently Golden Boy Promotions, but will more than likely leave them as he is managed by Al Haymon) are marketing him as the next U.S heavyweight champion of the world. All the pressure is on Deontay to win tomorrow night. But how does one expect Deontay to win if he has not fought anybody who could have given him the necessary experience to be competitive for this title match? According to Robert Ecksel’s prediction on boxing.com however, Wilder will hurt Stiverne and get him on the ropes, prompting the ref to stop the contest prematurely in favor of Deontay. This is definitely a possibility as Don King promotes Stiverne and Al Haymon manages Wilder and according to Ecksel, behind the scene deals can be made if it means making more money with Deontay as champion. Valid prediction, but I do not see this happening because Tony Weeks is the referee and he has proven high levels of integrity in his work.  I don’t see Wilder having success past the 5th round. Stiverne will weather the storm with his brain and patience, take Wilder into the later rounds and win via TKO stoppage in the 11th round.