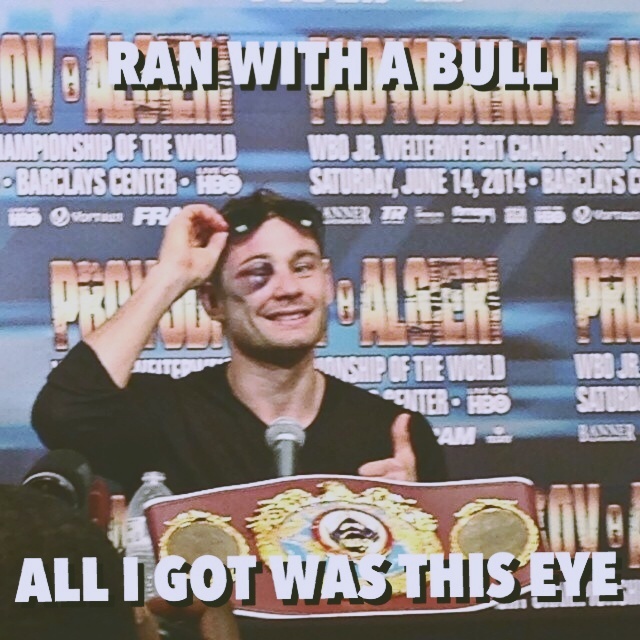 The Provodnikov vs. Algieri fight on Saturday night at New York’s Barclay center ended in a split decision, with the decision leaning towards the hometown and former kickboxing champion Chris Algieri. Although I personally am disappointed at the result, and the overall uphill climb Provodnikov seemingly has to traverse after impressively fighting really good fighters all the way from Siberia, Chris Algieri pulled the rug from underneath Ruslan while simultaneously putting his name in the hat with other big names of the lightweight/welterweight division. Chalking it up to really good conditioning, good eyes, and ring awareness (Yes, ring awareness, not ring generalship) Algieri stuck to boxing, with pretty much 11 rounds of that slick boxing coming from only having one eye. The most impressive part of Algieri’s performance was that he never lost composure, which was to me a refreshing change given how fighters in recent years (cough Broner cough Berto cough Ortiz) love  to act it up WWF style in the boxing ring.

On the other hand, Provodnikov had some really nice moments, where his left and right hooks look much faster and he did seem to have improved head movement. Unfortunately that was overshadowed with Algieri’s preparation. It was like Chris was even prepared to get hit, how he acted like such a professional starting from the second round, after being knocked down twice in the first round. Provodnikov said he was willing to die in the ring, but Algieri instead more convincingly proved that he wasn’t willing to stay down, which got him the win.

However, this article shouldn’t have been about how the fight turned out, for the most part we left that up to the rest of the boxing pundits this past weekend. This article is about responding to the incessant chatter now trying to play matchmaker with the winners and losers of this event. While it can be certainly fun to speculate of the future roadmaps of Provodnikov and Algieri, is it necessary to throw Pacquiao’s name in the hat? Why not Marquez? Why not Danny Garcia, Bradley, and anyone else in the huge list of people who weigh around 140 to 154 pounds? Seriously, it’s annoying that people are looking at names rather than the divisional champions. Algieri got his shot by putting in time, we should look towards similar fighters to fold into the talent pool rather than going for the biggest fish to get the biggest draw, yet again. Goes to show how much the weight divisions matter anymore, and seems like the list being passed around after any fight in the lightweight or welterweight division is sorted on “PPV Buys” from top to bottom.

Other than that, it was great watching Algieri teach some boxing lessons, and Provodnikov showing some improvement in the right direction. Here’s to more fights like this to be made soon.