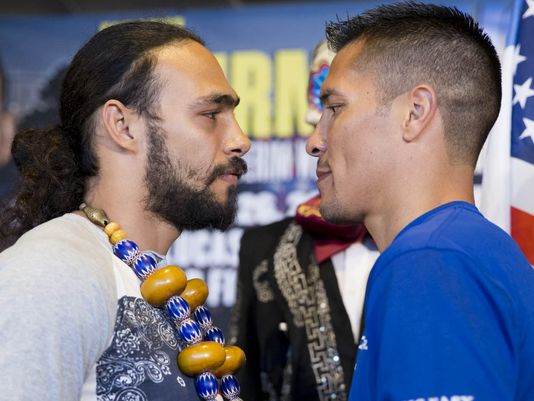 I almost forgot about tonight’s fights as twitter was on fire commenting on La Maquina’s fight versus John Molina. You could’ve sworn it was like Bradley vs. Provodnikov all over again as each man was trading awesome blows and making waves on twitter, and making me want to go home faster. I will cease commenting any more as hopefully this win will bring Matthysse back into the light to perhaps challenge Danny Garcia again.

I made it back on time to catch the main event, Keith “One Time” Thurman vs. Julio Diaz, a wily veteran needing one more time around the ring to make a statement. Keith is coming off a TKO win over the tough Jesus Soto Karass, but is facing another ring veteran who took what Keith was serving in the first round. Though what I was impressed by the most was the refinement of Thurman, with way more control and patience for throwing his blows, which probably now comes in a more fearsome manner because his hand speed is still there and looks faster than ever. Thurman’s footwork and head movement is also a lot more natural and overall, the few rounds he spent in the ring tonight were very graceful and relaxed. If “One Time” didn’t retire Diaz in the third, he would’ve have certainly chopped Diaz down with lefts hooks and murderous rights, though it seemed Thurman got a little impatient as Diaz kept coming forward after repeatedly connecting with big power shots.

Diaz is no joke, but Thurman was only warming up. It’s very unfortunate that he’s the fighter to avoid in the stacked Welterweight class, because he is truly a talent. Some gaps could be improved, such as his right guard getting loose as he lets his left hook go, but the evidence of growth in his footwork, feints, ring generalship, and overall position (a very underrated talent!) is very impressive. Thurman is always in position to throw a punch, and quickly disposed of a hard-grit opponent in Julio Diaz with repeated blows to the body. Which brings us to the significant blow of the night, the punch Thurman makes look good in all his fights…

Look back soon with more news towards the upcoming big event of the year, the Money Mayweather parade 😉