Hopkins vs Shumenov Recap and More 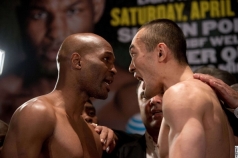 This fight was inspirational. Even Arsenio Hall was feeling good watching the veteran, Bernard Hopkins, do his thing on this night:

Bernard came out in the first two rounds as a student. Learning from his opponent, reading his movements, his gaps, and his mistakes. Shumenov allowed himself early to get drawn into the pace of a classic BHop fight.

As the fight progressed, Bernard Hopkins landed counter rights as Shumenov lunged forward without much of a game plan. It is a mystery to me as to why Shumenov has no head-trainer in his corner. On a night like this, it is necessary to have a head coach.

In the middle of the rounds, Hopkins began to move forward and dictate the fight. He was throwing lead jabs and disabling Shumenov’s attack. Shumenov got a couple of punches in, but never established any combinations. His one punch attack, looking for a BHop opening didn’t work. He should have known better.

Round ten was a break round for BHop. He smartly took a breather to prepare for the championship rounds. This proved to be the truth as he listen to his head trainer Naazim Richardson’s instructions to throw the over hand right. BHop was able to catch Shumenov with that punch and put him down. A successful 10-8 round for BHop entering the 12th and final round.

Dave Moretti and Jerry Roth got it right. Gustavo Padilla was watching another fight… Or was he? Some judges like to score fights based on their bias. I want to say that Gustavo Padilla judged this fight from the lens of a judge who enjoys high action fights. High action fighters will get the rounds in their eyes. It is necessary for today’s judges to see the fight in a holistic fashion. Bernard won, in my eyes, because of his ring general-ship, mental game, accuracy, effective punches, and dictation of the pace of the fight.

Bernard Hopkins delivered on his word. He unified the IBF and WBA light heavyweight titles before age 50. His philosophy of not fearing time because he prepares for it by investing in his body with a healthy lifestyle permits him to remain relevant. Where does he go next? I want to say that Adonis Stevenson would be too much for him. But then again, Hopkins always seems to find a way to make it happen. Hopkins called him out tonight. He wants that fight and knows he can exploit Stevenson. I hope Bernard gets his visa papers in place, we might be heading to Canada soon!

“Kid Chocolate” Peter Quillin did easy work of Lukas Konecny with a unanimous victory. In this middleweight fight, Quillin was able to win with the following score: 120-108, 119-109 and 119-109

In the penultimate fight, Paulie Malignaggi challenged Shawn Porter for his IBF welterweight title. It was a dominant performance by Porter as he was able to earn the TKO win over Malignaggi in the 4th round. This might be the fight that sets off the transition for Paulie. He has had a good boxing career, it might be time to hang them up and commit to a full time career with ShowTime Sports.