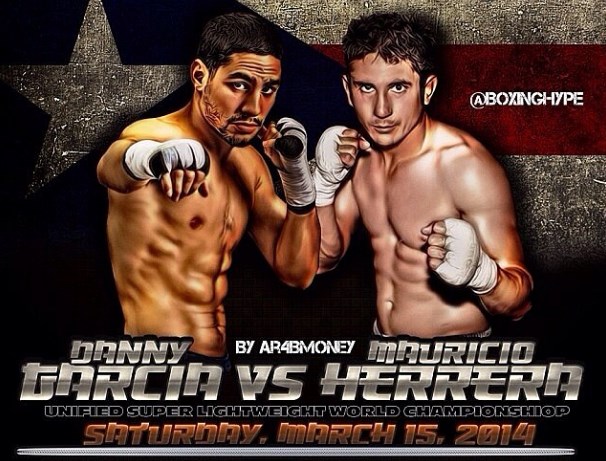 Last night, team BMB viewed the “anticipated” match between Danny “Swift” Garcia and Mauricio “El Maestro” Herrera. “Prodigal Son” Garcia, an ethnic Puerto Rican, was facing a little-known ethnic Mexican, Herrera.  In my brief analysis, I’m going to play to my strengths: my sex-appeal and literary devices. I will also display an egregious use of “air quotes”. Speaking of sex-appeal, shout-out to the lovely Rosie Perez, who was attentively watching the match:

Dag! #Herrera using everything but the kitchen sink. Sneaks a punch like crazy. @SHOsports #GarciaHerrera #boxing

Even though this was no Mexico v Puerto Rico (such as Tito Trinidad v. De la Hoya), the very same De la Hoya was trying to cash in on that angle by brining Garcia back “home”, the only difference being that Herrera’s history was completely ignored in the build up to the match.  Clearly, there was no money to be made exploiting Herrera’s background for profit.

As Mateo covered earlier today, Herrera executed his game plan with great efficiency, leading some to believe (Herrera being one of them) that he had won the match.  Garcia was frustrated by Herrera’s strategy during much of the match, and his trainer seemed to vent all his frustrations on him between every round. Still, with Golden Boy’s backing, a home crowd cheering you on, and facing a relatively unknown opponent, Garcia had a clear advantage. Herrera had a very steep mountain to climb in order to become champion, needing a TKO to win the belt.
Based on the above factors, I wonder if Herrera would have only gotten the “Tie” for knocking out Garcia.  Of course, I’m being facetious.  The end result was a “close” match, and so Garcia was able to defend his belt, in spite of the lackluster performance he displayed.  Some believe that making weight was a clear factor in Garcia’s lack of explosive punches and general power throughout the night.  Regardless, Puerto Rico has a reason to smile, as their reigning champ visited his home and “delivered” by defending his title.

Was anyone really shocked by the result?  We reached out to the boxing community, straight to the actual athletes themselves for their perspective on the referees’ decision in awarding Garcia the victory.  “The Latin Snake”, Sergio Mora told BMB:

@bloodmoneyboxin Fight went exactly as I expected. So many underrated, un heard of, Un-promoted fighters out there. Herrera is one of many.

Many others believed that Herrera was wining the match earlier on, and showed their dismay in the end-result.

What’s next for Danny Garcia?  It seems he’s thinking of moving up in weight, as he’s been fighting at 140 lbs for about 7+ years now.  After Golden Boy’s failure to beat Mayweather through Canelo, it’s no surprise that they are trying to find another fighter to bring in more cash while Canelo rebuilds from that loss.  By having a strong boxing “portfolio”, Golden Boy will be able to thrive and make money, as long as they are able to keep the feds off of their backs, assuming the rumors are true.

Regarding all these rumors about my company and Richard Schafer, I will be setting the record straight soon.