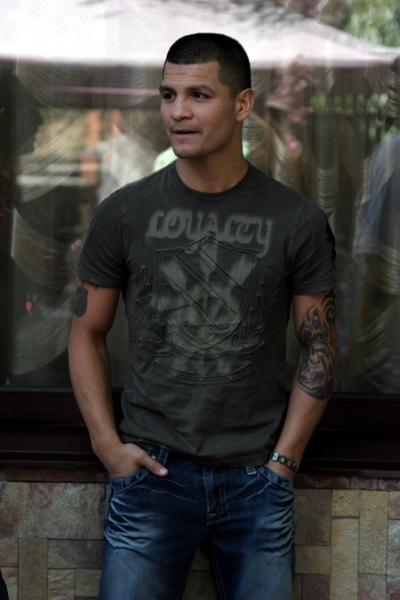 Saturday, March 1, 2014, only five months after their first fight, Bryan Vera (23-7, 14 KOs) will step into the ring against silver spoon Julio Cesar Chavez Jr (47-1-1, 32 KOs). It is a rematch. As Chavez Jr said in today’s press conference, he is thankful that Vera gave him this opportunity to fight him again. To the uninformed boxing fan, that statement would lead some to believe that Vera won their first fight. However, Vera lost that fight in controversial fashion, as many saw him outworking and outpointing Chavez Jr. In my personal opinion, Chavez Jr. landed a couple of massive shots, but Vera did more than enough to collect rounds and run straight to the bank.

At a contracted weight of 168lbs, both fighters did their part in honoring today’s weight in. Many questioned whether Chavez Jr. would make the weight, as he has a history of slacking off in camp, as seen in HBO’s 24/7 leading up to his fight against Sergio Martinez or getting a DUI days before his fight against Marco Antonio Rubio. The man has simply created a bad name for himself. For this fight, however, he has started off on the right foot.

Vera is a blue-collar boxer. He trains hard and will give you a hundred percent in the ring. Vera is also a very smart fighter, registering a high boxing IQ, not to mention a very strategic corner in his head trainer, Ronnie Shield. All of this can’t be said about Chavez Jr. What is left of his training camp are those who have stayed loyal to him. Freddie Roach didn’t work out, and neither did Robert Garcia.

This fight represents huge dividends for both fighters. For Vera, 32 years old now, it represents one last push for a big pay day. For Chavez Jr., it represents another opportunity to redeem himself. Having recently turned 28, Chavez Jr. still has years left in the game. He is at a point in his career where he should not be okay with simply being the son of a great legend. Tomorrow is his chance to tell his critics that he is dedicated and committed to boxing.

Key’s to Victory for Vera

Key’s to Victory for Chavez Jr.

There is an X-factor in this fight that is worth mentioning. Chavez Jr. made the contracted weight and he is looking to shut his critics up with a convincing win. But these two things are not the X-factor. Chavez Jr. is a father now. The motivation one gets when they bring a new life into this world leads to inspiration. Chavez Jr. is no longer doing this for himself, but for his new baby. If Chavez Jr. had a successful training camp and is in good shape, Chavez Jr. will knock out Bryan Vera. Chavez Jr. cannot afford to go to the cards. Judges are aware of the results of their first fight. If Vera stay’s busy enough, the judges will award him with the win.

I give the edge to Chavez Jr. in this fight. Plain and simple, he was out of shape and had no game plan in their first encounter. He will be in shape tomorrow, he has made the weight, and he has a new baby in his corner. Chavez Jr. will win via 8th round stoppage tomorrow night in the Alamodome.