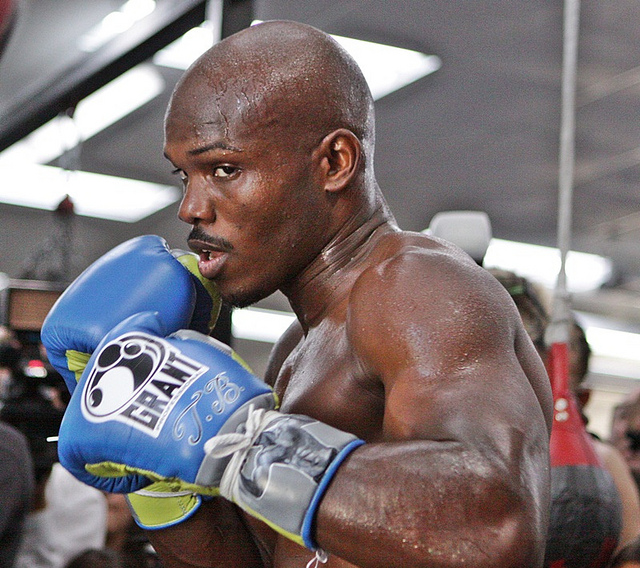 Tim Bradley certainly is an unlikely enigma. He’s not facetious, like Mayweather, in displaying a certain personality on the outside and hiding a relentless perfectionist on the inside. He doesn’t bleed confidence, like Broner or Malignaggi, as Bradley often (maybe inadvertently) shares his fragility to the media, perhaps in an attempt to get sympathy to his colorful but typical story. In my opinion, he is an enigma simply because perhaps even Bradley himself doesn’t know where he’s headed, and it’s all but certain that the media, the fans, and his future opponents know even less. After giving some thought, I believe he could be headed to play the role of the Beat-em-up Action Hero, the GI Joe, that young fighters can look towards to model their discipline and attitude coming into big fights like he has done.

In the minutes heading into the Marquez vs. Bradley fight, The BloodMoney Boxing Team were overwhelmingly Pro-Marquez, strongly believing that Marquez had the higher ring IQ, and would figure out a way to land his counter right hand in a meaningful way to win every round in a unanimous decision. Nobody thought that Marquez would be able to knock him out, but it was in all our imaginations that Bradley would be outclassed, out-worked, and just disrespected by Marquez. All but our home Maurice were convinced, he was just saying “I don’t know! I just think he’s going to win this!”

And that he did. Bradley indeed was disrespected by Marquez but as a sore loser, not the winner of the fight. The beginning rounds and the later rounds would have it’s battles, but Bradley pretty much controlled the pace of the fight, who was faster, busier, and more agile than Marquez expected. To be honest, compared to how Pacquiao approached the fight, Manny at least prepared for a busy fight by covering all corners of the ring, but it seems Marquez was just not prepared to chase, cut off, and anticipate Bradley’s movements. Marquez looked like he was fighting Mayweather, and although Bradley arguably fought the best fight of his career last weekend, he was not a Mayweather, which bodes worse for Marquez. Marquez simply did not seem prepared for the fight, and maybe his emotions after Pacquiao’s knockout really did already put his mind and body towards retirement-land.

Bradley however, was shining in every feint, every jab, and how he circled his opponent. I’m still debating on his style, but at the very least, I think it actually is starting to reveal itself. Desert Storm might be an appropriate name, as he uses his athleticism to set an extremely high expectation of the pace of the fight with his feet and feints, and then circling the opponent in a storm of jabs from all angles. His jab was excellent, and he seemed to have learned to better pick the spots on when to exchange and stay in the “battle pocket”. Rudy Mondragon has said himself that Bradley’s off-ring habits (being vegan, keeping in shape, staying in the gym, clean living) has always meant that his body was always the ideal platform for a professional boxer, perhaps second only to Floyd Mayweather himself. It might be just the power that’s missing in Bradley’s repertoire. His jab is good, but his right is a pedestrian hook that might have the same power as his jab, just because his jab is thrown from a good position. If he adopts the kind of strength and conditioning to build up power punching and most importantly, an intuition of power punching (which he hasn’t shown yet, but his style opens up an opportunity for), he will be a formidable pillar in the welterweight class.

At this point, Pacquiao may be able to still beat Bradley, but if it was iffy with judges the first time around, it will definitely be harder to score if there will ever be a second time. If there’s any evidence of boxer evolution while in the game, Bradley has now set an example of how to survive and thrive in that storm. He’s a real life GI Joe, a living superhero that really is sturdy as f!ck and is still willing to to learn and grow. I hope all fighters learn from his example, because he’s emerged now as a benchmark fighter.