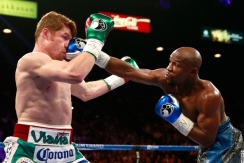 Don’t worry, I am not going to tell you that the Blood Money Team told you so, but I am going to use a few lines to share some thoughts from last night.

First – Definitely not The One:

Ishe Smith vs. Carlos Molina. As a good friend of mine, who is a HUGE boxing fanatic, once told me – boxing is like sex, any is good. What does this have to do with anything, you ask? Well, the IBF super-welterweight championship bout between Smith and Molina was a perfect example of this expression. While it may not have been an action-packed fight, fans were able to see professional boxing between two of the 2nd-tier boxers in the welterweight division, even though it was for a belt. Congratulations to Molina for capturing the IBF title. But I don’t see Molina holding on to this belt for long. Especially, if his next bout comes against any of the fighters who should be in the running for that belt and happen to be in the top-tier of the middleweight division, like Trout, Lara or Alvarez.

Second – Soon, may be The One:

Danny Garcia vs. Lucas Matthysse: All I can say is that Danny Garcia was impressive last night. Garcia not only confirmed his technical soundness, he also showed the world his patience, ability to move effectively and ring intelligence. Neither Garcia nor Matthysse fought in their typical aggressive style, but a lot of this has to do with Garcia. He eliminated Matthysse’s biggest threat, punching power, by using the ring to his advantage. By doing this Garcia was able to exploit Matthysse’s defense, landing powerful shots, including several of his famous left hooks. Garcia’s left hook ended up being the defining punch of the fight, turning Matthysse into a one-eyed boxer who couldn’t see Garcia’s dangerous lefts coming in for the landing. Regardless, no one can deny Matthysse is a warrior and, had his eye not closed, it would have been a completely different fight. But, in the end, Garcia fought like a true champ and showed why he is a force to be reckoned with in the junior welterweight division.

Floyd Mayweather vs. Canelo Alvarez: There is not much that needs to be said about this fight. Money May did what he does best, display defensive superiority and calculated offense, while showing everyone why Canelo just isn’t ready to take his throne yet. Don’t get me wrong. Canelo had some moments of light – backing Mayweather against the ropes, landing some good right hand shots and quick combos.  But most of his shots either missed Floyd or hit his gloves. Mayweather, on the other hand, was able to pick Canelo apart, landing punches at will against the outmatched Alvarez. Even though we are all aware of Mayweather’s talent, he never ceases to amaze as he picks apart every opponent who steps up. In the end, while the pound-for-pound king remains on his thrown, us fans welcome the next worthy combatant, excited to see if Mayweather will ever be dethroned.