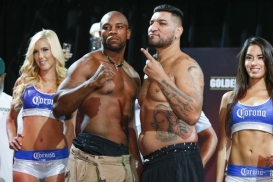 After a month long hiatus from writing about boxing, the Blood Money Boxing Team is back! Not by choice really, it’s just that August was a slow month for the boxing community. As it should be due to the fact that the fall has a killer line up of fights. We all need a break, even from the things we love so much. We warm up the month with a 12 round main event that will most likely give the fans some scrappy action.

Chris Arreola (35-3, 30 KOs) will step into the ring (or as he puts it, steps down to fight Mitchell) against Seth Mitchell (26-1-1, 19 KOs) in India, California. Not only is this a fight for the WBC international and WBO NABO heavy weight title, but it’s also a crossroads fight. Both fighters find themselves in a situation where they need a win to give them extra life within the heavyweight ranks.

Arreola is coming off a 12 round decision lose to Bermane Stiverne. Stiverne was able to box Arreola all night and put Arreola down in the third. Mitchell is coming off a 12 decision against Johnathon Banks. This was a rematch. Banks KO’d Mitchell in the second round of their first show down back in November 2012. Both have their shared struggles, both have a lot on the line in their upcoming fight. For the winner, it means moving forward in their career. For the loser, it means rebuilding once again.

For hardcore boxing fans, this fight will be entertaining for as long as it lasts. BoxingScene is giving the edge to Arreola. I can’t disagree with their assessment. Mitchell started boxing after he could not make it in the NFL. Somewhat a similar story to Sergio Martinez, having started late, but Martinez is a special case. Kermit Cintron also started boxing late and has not been able to cut it, now a has been in boxing. Mitchell, although athletic, does not have the experience to step into the ring against a journeyman like Arreola. Arreola has been in the game for sometime and it will only be a matter of time till Arreola TKOs Seth Mitchell.

Mitchell will try to box Arreola in the first couple rounds, but will not be able to hold off Arreola. Arreola will pressure Mitchell and overwhelm him. He will set Mitchell up with mid power jabs only to come full force with power shot straight rights. I see this fight going 6-8 rounds with Arreola stopping Mitchell dead in his tracks.

Check out what went down earlier this week at the press conference. With the exception of the MMGay comment by Arreola and his playing of the hyper-macho game, he was spot on in trash talking and breaking down where Mitchell stands in the boxing game. Mitchell has a lot to prove in the boxing game. Tonight can be his night to prove many wrong. I’ll be honest, I highly doubt he can step into the ring at this level.