The former WBC Middleweight champion Julio Cesar Chavez Jr (46-1-1, 32 KOs) suffered a cut (more like a mosquito bite) above his right eyelid during training camp and has withdrawn from his scheduled fight with Brian Vera (23-6, 14 KOs). According to boxingscene.com, Chavez Jr. suffered the cut while sparring and it required two stitches to close it.

Yet another set back for the silver spoon fighter who has not set foot in the ring since his one sided defeat to Sergio Martinez back in September 2012. He was sidelined for nine months after testing positive for marijuana post the Martinez fight.

The cut suffered during camp gave Chavez Jr and his team something to think about. In the end, they decided to postpone citing the “decision was heavily influenced by what happened several years ago to Julio’s father.”  This of course, was the famous fight between Oscar De La Hoya and Julio Cesar Chavez Sr. Chavez Sr suffered a minor cut in training camp, but still went forward with his fight against the Golden Boy. The fight didn’t last long as Chavez Sr’s cut opened up after the first round and got worse after that. The fight didn’t go beyond eight rounds.

My response to this whole mess: How convenient for the 27 year old. How convenient because I don’t think Chavez Jr was on pace to make the 168 lbs limit. Some say that he was walking around north of 200 lbs in early July. His fight with Vera was originally discussed to take place at the 160 lbs limit, but later changed to 168 lbs limit. 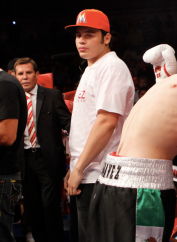 I guess Sergio Martinez was right. Chavez Jr does not respect the game nor his craft as a boxer. It is very easy to hide behind his father and say he does not want to take a risk in repeating family history. No disrespect to Brian Vera, but Chavez Jr should go into that fight  and over power him, cut or no cut. Is the real reason that Chavez Jr is postponing the fight because his diet is not right? Is it because Chavez Jr is still close to walking around at 200 lbs? Is it possible that Chavez Jr is neglecting a proper diet that is required for a boxer at his level?

These are all valid questions. With the privilege that comes with the Chavez brand, Jr has the unearned power to call the shots, pull out of a fight and not show his face to the boxing community to inform them as to what is really going on.  The reality is that Jr has the boxing capital at his finger tips to evolve into a great fighter, yet his lack of discipline and drive will create a legacy of wasted resources and decent talent.