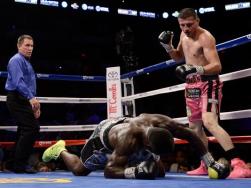 July 27, 2013 was supposed to be the day Andre Berto (28-3, 22 KOs) would rebuild his career. It was supposed to be a night where Berto would enter the ring against a reliable gatekeeper in Jesus Soto Karass (28-8, 18 KOs). Things were lined up to work for the 29 year old. Nothing better in boxing when a guy like Karass can disrupt the agenda of promotional giants (I’m looking at you specifically Golden Boy).

Berto entered the fight looking strong in the physical sense. He came into the fight fit as can be. He did however appear to look really stiff at times and looked like he needed to incorporate some type of cross-fit or yoga into his workout routine. The man did not look comfortable in the ring and started round one again not being himself. He incorporated the shoulder roll and head shake that Floyd Mayweather Jr has made famous. This hurt Berto as Karass hurt him both in the first and third round of the fight. Karass was utilizing his length and catching Berto with looping, effective rights.

There were times in the fight where Berto’s new trainer, Virgil Hunter, appeared to be frustrated with his fighter. It sounded as if Berto was not manifesting the guidance presented by Virgil.

As the fight went on last night, one thing does need to be made clear. Although Berto did not have great footwork, movement, defense, technique, or game plan last night, the man did display a level of heart unheard of. Berto hurt his right shoulder early in the fight and almost finished the entire fight with only one good arm. He fought through it and displayed a great deal of resiliency.

Round 11 showed great back and forth action. Berto caught Karass with a body shot and it dropped Karass. After the fight Karass stated that it was a low blow and that is what dropped it. He also said he was never hurt by Berto. Nevertheless, Berto scored the knockdown, but in my eyes, failed to win round 11.

Round 12 was in my opinion the Knockout King round. Soto Karass caught Berto with a short and sharp counter left. Berto leaned into it and did not see it coming and it put him on the canvas. He beat the count, but Jon Schorle saw Berto as unfit to continue.

It was a great night for Karass as his career is back on a path towards one or two money fights. It was good to see a guy like Karass rise up when many put him in this position to simply serve as a stepping stone for another boxer. Berto looked defeated at the end of the fight as he was in tears and sought comfort in the arms of Virgil Hunter. At this point, Berto not only needs yoga to get some of the stiffness out of him, but also to heal his mind, body and spirit. Is it too late for Berto to make it in the game? One thing is for sure, he needs to find his own style and identity in the ring and out.

Two loses in a row for Berto now. Both fights (prior fight against Robert Guerrero) were supposed to elevate Berto. It did not happen as planned and that is the beauty of boxing. Not sure where Berto goes from here. Soto has some options. There is non-vicious Victor Ortiz who needs a fight, that would be an action packed match. There is also Robert Guerrero. These three fighters all have a win against Berto in common, so that would make either one of these fights interesting.

Lastly, for Golden Boy Promotions, shame on you for awarding Keith Thurman with the Knockout King II award. Maybe it’s time to drop the whole Knockout King award if you are never going to get it right.