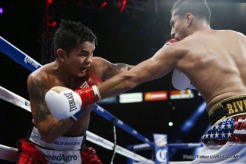 In an action packed fight at the Home Depot Center in Carson, California, Marcos R Maidana (34-3, 31 KOs) defeated the hometown favorite Josesito Lopez (30-6, 10 KOs). I wouldn’t say this is a fight of the year candidate as it ended a bit early and I would have liked to see more action. Nonetheless, these two fighters left it all in the ring and gave the fans what they wanted: The Blood Money Boxing Experience!

The first round saw both fighters exchanging and sizing each other up. It was the brawlers way of having a “study round.” Wasn’t quiet as a study room would be, but loud with multiple leather exchanges. Round 2 was a Maidana round as he put his newly developed jab to work and made his power shots count. Lopez came back in rounds 3 and 4 executing spectacular timing. At moments, I thought Lopez could not miss and that he had figured out a way to fight Maidana and sustain it for 12 rounds. Lopez fired the crowed up as well after taking a couple of shots from Maidana. He signaled to the crowed as if he was not hurt and wanted more. He then went on to execute his timing and connect some accurate head shots on Maidana.

Round 4 was a survivor round for Maidana where he showed great intelligence. Maidana took a mean body shot from Lopez. Flashing back to his fight against Khan, Maidana continued to fight toe to toe and went down a couple of times as a result. History didn’t repeat itself this time however. Rather than brawling and going toe to toe, Maidana smartly clinched and slowed the action.

Round 5 was a game changer. Maidana hurt Lopez on the ropes and this energized him. Rather than holding or slowing down the action, Lopez tried to fight his way out of it and brawled with Maidana. This fit perfectly into Maidana’s style. In round 6 came a massive right hand that put Lopez down. His knees buckled and he took a knee. Not fully recovered, Maidana went on attack mode and recognized that this was the time to finish off his opponent. Maidana did not throw wildly. He connected 3 solid punches that pushed Lopez back to the ropes forcing Lou Moret to step in. Maidana scored a TKO win in the 6 despite being down on the cards:

Lopez demonstrated great heart and courage. He was fighting to win and he was fighting for the many fans that packed a record breaking house in Carson. With two loses in a row, Lopez is in need of a victory in his next fight. No title shot opportunity any time soon for him at this point. Maidana will continue to move forward in his career. There are many match ups that would be great for him. Many say he should fight fellow countrymen, Lucas Mattyhsse. I would like to see a rematch between him and Devon Alexander. This was Maidana’s first fight at 147 lbs and it was before he started working with Robert Garcia.