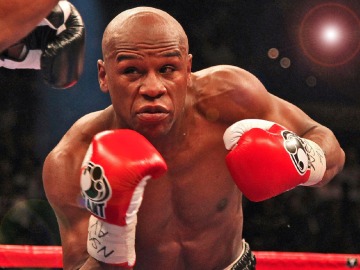 Let me take the mic to speak up about the great marketing genius Money Mayweather’s decision to take on Canelo Alvarez on September 14th of this year. CALLED IT.

I think Mayweather understands that waiting any longer for a fight against Canelo would risk him getting too good if he fights him any later than this September. Plus, Mexican Independence day after the weekend? Bills, baby, bills.

I’m supremely excited for this fight, only because both of my colleagues called that Canelo is not ready yet, and though I agree, I felt that if Mayweather chose to fight him this year, it would actually mean that he respects him and believes that Canelo would deserve to share his stage sooner than later.

I think Canelo is a supreme talent, yet hasn’t been really challenged in his past, I would say, 5 fights, not including Trout. Canelo is very similar to Mayweather in a way, in the fact that he, too, gets intellectually bored under the bright lights and the stage, pacing, bobbing, feinting, looking for a challenge in the eyes of his opponent. One key difference is in the boxer’s stance between Canelo and Mayweather come September, as Canelo will be standing square against Mayweather’s left profile. Canelo’s stamina will also be key as he needs to get used to fighting the full 12 rounds. He is frequently seen taking breaks in his recent fights that go the distance, and there will be no time for that when he’s face to face with Mayweather. I think he also needs to exploit his feints and body blows, as his is one of the best in the business. I actually haven’t seen any of his mastery of these two areas since his debut fights in America, with Jose Cotto. He also needs to stop depending on his right and commit on combinations. I hope that I don’t see that lunging/looping right at all, because I doubt Mayweather will need to see tape to sidestep and put a nasty cross across Canelo’s face. Canelo’s got a great chin, but only to punches he sees coming, as another natural talent for him is rolling punches off his head. I believe Canelo hasn’t been hit with a punch he hasn’t seen yet, and maybe that’s what Mayweather is hoping for this fall.

Again, I’m psyched that Mayweather took the plunge and challenged Canelo. I hope Canelo really sees this as an opportunity and is extra motivated and inspired to bring his absolute best in the ring with someone used to dragging his A-game each and every Saturday night. We need to see a different Canelo later this year, otherwise, the bored one will be Mayweather, where in the start of the 6th round he’ll already be wondering who to share the stage with next. Prove Mayweather right Canelo, and push the pace with your feints, and combinations of hooks. Horale pues! The fight below shows some of the fierce combos that I want to see, except double time. Let’s get it, Canelo.