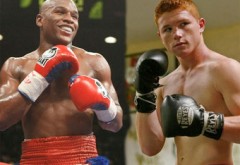 Not quite in the official sense, but boxing fans can always dream for match ups like this. With Floyd Mayweather Jr. working on honoring his 6 fight contract in 30 months with Showtime, fans eagerly await for Money May to announce his next opponent. Off a recent victory against Roberto “The Ghost” Guerrero, Floyd has 5 fights left and has already informed the public that he intends to fight in September. Two fights in the same year? He hasn’t done that since he fought De La Hoya and Hatton in 2007!

So who is next? Who will Floyd’s next five opponents be? Here is what our boxing experts had to say:

A lot has been said about who Money Mays next opponent will be.  It seems that there is a consensus between the media around the stats, and all have fallen in love with the idea of “El Canelo” Alvarez having the next fight.  In the next few paragraphs I will make the case for Money May’s next opponent and beyond.  Instead of mere speculation, I will rely on statistics and Money May’s careful opponent selection.

Money remains as the sport’s most efficient fighter, in terms of plus/minus overall punching connects (+24%).  This means that he not only punishes his opponents with over 40% efficiency, but he also has an air tight defense that limits his opponents offence to a mere 17% efficiency (33% average in pro boxing).  Of Mayweather’s last eight opponents only 2 had a plus/minus statistic above (+10%), Oscar de la Hoya (+11%) and Shane Mosley [in his PRIME] (+13%).  The last three opponents had a plus/minus statistic of (-1% Guerrero, +1% Cotto, 3% Ortiz)  all three, solid professional fighters, but for as much punishment as they were accustomed to inflict in victory, they were accustomed to taking a beating themselves  (good choice Money).

His next opponent will not be someone in the top of this list:

Canelo’s efficiency benefits from his opponent selection aka inflation.  The latest being the most efficient (Trout +7%) and he gave him his toughest fight yet (some even have Trout as the winner).  However, his weight (walks around at 170 at least) and his seemingly good skill level leave him a long shot to get the next crack at Money. It’s too risky for Money to fight Canelo next, he has five pay-per-view bouts; this will happen in fight 5 or 6.

His next opponent will come from this list (Plus/minus):

Would make an exciting fight.  Khan’s athleticism would make the fight challenging enough, but Money would be too much.

Young and ambitious, but not at this class yet.

He looked old and frankly his body is falling apart on him in the ring.  Money likes to prey on these type of fading stars (see Mosley).  This might be closer than we think, especially if he saw the Murray fight.  Weight might be an issue, but Martinez is under-sized at 160 lbs. I can see this at a catch weight or even 154.

Has the fan base and would make a hell of a fight. [He needs at least another good fight with a “good” fighter]

(if he bounces back against Brandon Rios) – If Manny has two solid return fights, we are all back in line for the mega-fight.

Like my dad always says (Translated from Spanish: With money you can make the dog dance).

Mayweather has 5 fights left, fighting at an unusual (for him) 2 fights a year. To me, that constrains the level of choice that matchmakers can make, and maybe Mayweather’s schedule is really a matter of putting a master stroke on his retirement come 2015. It’s in Mayweather Promotions’ best interest to maintain Floyd’s value while sustaining interest in the next 5 fights.
I believe he has to fight Canelo Alvarez next, while the second fight is a toss up depending on the activity of the has-beens: Ortiz, or Khan. I think it’s also a possibility to see Alvarado win the second fight bid. Alvarado looked very impressive against Rios, and could put himself in a very good position come 2014. Danny Garcia is another one who I put up in there to look very good against Floyd in 2014. I think by that time, he’s going to be comfortable at a higher weight. In 2015, I think the game will have changed. Floyd will have changed, and so will the landscape of prospective opponents. By 2015 I think it would be nice to see Floyd fight Maidana, and then lastly Pacquiao. I put Manny in there because I really believe that he’ll get smarter about the people around him, and get rid of Arum, if I can truly feel what’s in his heart. So here’s my list:
5 Picks:
1. Saul Alvarez
2. Amir Khan
3. Mike Alvarado
4. Danny Garcia
5. Manny Pacquiao
Rudy Mondragon’s PIcks
There are a couple of things I would like to point out before I share my picks. Some of the things we learned from the last fight was that Floyd did not put on his usual promoter hat. He was relaxed and calm and did little trash talking. This could be a sign of maturity as well as being content because of his mega contract with Showtime. I do believe that Showtime will put some pressure on Mayweather (which has already started from external sources). From the lack of PPV sales to the difficulties of selling out the MGM for his recent fight with The Ghost, Showtime expectations will be high for Mayweather.  What he will have to is select a PPV, fan favorite fighter to fight next. I’m not saying that he needs to fight Canelo next, but Floyd needs to fight someone who will be a huge draw during Mexican Independence weekend. Having said that, here is how I see it unfolding:
1. Amir Khan
Since Amir is coming off two wins after his defeat to Danny Garcia, he finds himself in a decent moment in his career. He fights under the Golden Boy Promotions banner and draws a large UK fan base. This can definitely sell domestic and international PPV sales as well as bring in many fans to Las Vegas.
2. Danny Garcia
Danny is coming off a win against Zab Judah. Danny had to dig deep in this one to beat the veteran Judah and therefore I can see him taking a tune up fight next. Look for Danny to take on a beatable opponent late in the fall to set up a May 2014 showdown with Floyd.
3. Lucas Matthysse
If Lucas can beat Lamont Peterson and one other worthy opponent, he will earn a fight against Floyd. He is making a name for himself as a dangerous fighter who many are avoiding. Once Floyd pinpoints Matthysse’s weaknesses and Lucas wins his next two fights, Showtime will have no troubles promoting this one.
4. Manny Pacquiao
The possibilities of this fight happening will be alive as long as both of these fighters are still standing. Look for a Pacquiao win against Brandon Rios, a 2014 year of tune up fights for Pacquiao and we will see Floyd’s penultimate fight against the veteran in May/summer 2015.
5. Saul Alvarez
Fast forward to September 19th, 2015, Mexican Independence weekend. Floyd Mayweather’s final career fight against the future star of boxing. The stage will be set, PPV sells will be through the roof, the MGM won’t be sold out because this fight will take place on Las Vegas Blvd (yes, Las Vegas Blvd, TMT & Golden Boy Promos will steal Top Rank’s original idea to make a fight on the strip). This fight is a huge risk for Mayweather and waiting out this long will maintain Floyd’s stock value and undefeated record. This will be the biggest risk Mayweather will take in honoring his 6 fight contract with Showtime. He will go out with a bang as retirement for Money May will be official in 12 rounds or less…
Wild Card: Paulie Malignaggi
This one is just for fun, but there is a possibility of Paulie landing a fight with Mayweather. Paulie fights at the welterweight limit and his next opponent is Floyd’s little brother, Adrien Broner. If Paulie can win in June, I can see a fight between Money and Paulie taking place for three reasons: 1) To avenge his little brothers defeat 2) Paulie is a “worthy” opponent coming off 6 wins in a row 3) Both fighters can sell the fight with their promotion skills.
5 Picks:
1. Amir Khan
2. Danny Garcia
3. Lucas Matthysse
4. Manny Pacquiao
5. Saul Alvarez
Blood Money Boxing fans, who do you think Floyd Mayweather will fight next?