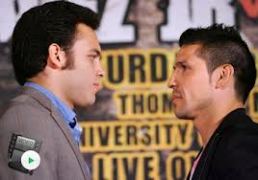 In less than a week, the boxing world will finally get to see a fight that needs to happen. Both Chavez Jr and Martinez find themselves in great moments in their successful careers. Both fighters are hungry. One searching for boxing credibility and the other in search of the fame. The stage could not be any more perfect. Promoters have finally agreed to make this fight and weight negotiations are where they need to be. Neither fighter is fighting at a foreign weight class. Plain and simple, after September 15, there will be no excuses and we will finally get to see who’s the best at 160lbs.

Each fighter has strengths and limitations. Here is a breakdown of what I think each brings into the ring:

Lets talk about each fighters limitations.

No prediction for this fight, just a breakdown. The winner will be the fighter who executes the appropriate strategy. It is definitely a great match up and way more competitive now versus 2 years ago.