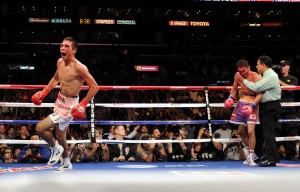 Saturday night, October 15, 2011 was set for a Bernard Hopkins and Chad Dawson main event. Believe it or Not was the cliche theme selected to promote the fight. However, the main event failed to live up to the hype of a theme that seemed to favor Hopkins in making history yet again as the oldest athlete to ever capture a title and now, an opportunity to defend it. Instead, fans who packed in the Staples Center in Los Angeles, CA yelled “Bullsh*t” at the top of their lungs to express their discontent with the outcome of an uneventful main event fight. Not all was lost for boxing fans, as they got to experience thrills and excitement as the powerful fists of Jorge Linares (31-2) and Antonio DeMarco (26-2-1) landed at will on each other. A 2 to 1 underdog, DeMarco started the fight slow and not landing many punches. Linares looked like a prime time boxer, landing his fast paced combos and collecting points round after round. In the middle of the fight, Linares suffered a dangerous cut on his nose, parallel to his eyes. This only gave DeMarco more confidence and energy to press forward. Linares fought bravely and continued to win round after round. Through 10 rounds, Linares had out-punched and out-connected DeMarco 10-0. Nonetheless, stats and CompuBox Numbers meant nothing as Linares’ corner urgently informed their fighter that he needed to score a knockout to win the fight. Linares did not think twice as he started the 11th round, looking for the knockout with conviction.  Power punch after power punch, DeMarco continued to hurt Linares, punches that seemed to further aggravate the deep cut he had on his nose. Raul Caiz Sr. saw enough as Linares was up against the ropes with his gloves covering his bloodied face, not throwing any more punches.

The script was flipped on this one to say the least. On paper, the fight looked and still appears that Linares was working his way to victory. The fight itself however, was a different story, one that needs to be watched (on youtube) as a modern boxing classic. All three ringside judges had Linares up on their cards. Two had Linares up 92-98 while the third had it 91-99. Linares threw 627 punches and landed 216 while DeMarco only threw 440 and landed 97. Output and percentage favored Linares, but the effective power punches and conviction to pack on the blows to finish an opponent off belonged t0 DeMarco. This fight reminds me of classics such as De La Hoya/Trinidad or Julio Cesar Chavez/Taylor (debatable and controversial ending) or De La Hoya/Vargas. Fights that looked one sided, yet by the end of the night, tides turned and persistent boxers found ways to win their fights.